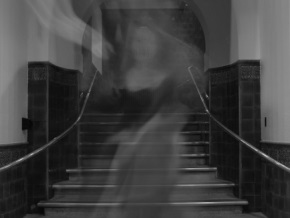 Spiritualists believe that strong emotions, especially anger, can bind a spirit to the earthly plane of existence. Some may believe that when an angry person dies, their personality and attitude lives on and can cause an oppressive or uncomfortable feeling in the still living.

Spiritualist might explain a residual haunting as intelligent enough and believe that the personality was a person who was very attached to their belongings and become more active when their former homes are being remodeled or new families move in.

Some will fondly remember a ghost from their childhood who often kept them company when everyone else was too busy. Companion ghosts are usually deceased family members or the soul of a child that had lived on the property or near the vicinity. Of course, most people call these imaginary friends.

Ghost of science-minded people and atheists that spend a short time earthbound because they did not believe in survival after death and are understandably curious about the afterlife.

Ghost of a person that refuses to move on and remains attached to their loved ones, which Spiritualists believe doesn't allow the still living to stop mourning.

Ghost of person that may not have been on their best behavior in life, even though they were brought up impressed by Christianity. They are well aware that they are dead but would much rather stay at home as a shade than accept their mortality and  risk burning in Hell for all eternity.

Ghost of person that survived death and are still attached to their former lovers. They will allegedly cause problems with any new relationship until the agent makes them understand that they have both moved on.

This type of spirit is a legacy ghost because some people confess to unknowingly channel artistic pieces that are not their own, but from a famous artist or musician whom they believes wishes to carry on their work.

It is rare that a child's personality remains earthbound but if they do the ghost is usually immature and childish and likes to play pranks on the living if nothing but to scare them.

The most popular belief in ghosts is that they all seem to have some form of unfinished business. Once they communicate with the living and their needs are fulfilled or justice brought, they finally move on.

A spirit that seems bound to a certain geographic area and are often harbingers of death for those who see or hear them.

This usually happens with suicide victims. After taking their own life, their personality remains just as unhappy and Spiritualists believe can cause a sense of sadness in the living. However, people who were deeply depressed and died of natural causes can also end up earthbound. Some believe that this is the origin of many cemetery ghosts, who are still mourning the passing of a loved one even though they too have passed on.

The popular notion is that many ghosts are not aware that they are in fact dead, but go about their daily lives never considering their own mortality.

A spirit who returns to seek forgiveness from someone they had wronged in life.

Sudden loss of life during both the American and British Civil Wars and the atrocities associated with them help perpetuate stories of the apparitions of soldiers or even whole battles. However, it is also common to hear of a historical home used as a makeshift hospital for the wounded and dying to be haunted by the men.

Creepy caves that are said to be haunted always seem to be the residence of the spirit of an old hermit who allegedly made his home inside.

Contrary to popular opinion, cemeteries and graveyards are rarely the site of paranormal activity. On the rare occasions stories about these phantoms circulate, they are usually tales of grieving souls that return in black to mourn the loss of someone they had lost in life.

The period-dressed apparitions of important figures in regional history are almost commonplace in places listen on the Register of Historical Places. And why not? These people were passionate and probably died without seeing their dreams met.

Hospitals, asylums, nursing homes and sanatoriums always seem to be haunted by at least one former patient. This isn't surprising considering the magnitude of people who pass away inside the buildings.

Former guests who died tragically sometimes return in spirit form and are sometimes exploited as ghosts by hotels that offer haunted getaways.

Prudent former librarians who appears wearing drab colors to match her personality usually guard the oldest books. With pursed lips, she wrings her hands in worry that some unknown disaster will befall her cherished books.

Desperation and fear are only two emotions that seem to imprint on old jails and penitentiaries. Former inmates, especially ones that were executed on site, are often reported in their former cells. Often, visitors succumb to an ambiance of demoralization said to resonate from former prisoners.

The phantom hitchhiker looking to be picked up is a common theme along windy, dark and deserted back roads. These souls are supposedly ghosts of people who were murdered nearby.

Ghosts at high schools are usually teachers or students who have died on the way home from school and for some reason return. College and university ghosts are usually prominent figures in the history of the institution.

Many historical taverns, bars and casinos have well documented turbulent pasts that seem conducive to ghost stories. It's not uncommon to hear of the apparition of a card holding man who died when he was caught cheating at poker and now returns to the site of his untimely demise. Another common theme is the lady of the evening who was murdered while she was with one of her customers. This type of spirit is usually known for their affections towards male employees and occasionally even visitors.

Thespians are a superstitious lot and there are so many plays featuring otherworldly visitors that it's no wonder so many theaters are called haunted. This is usually by a former actor or actress who enjoys returning around the time curtains go up.