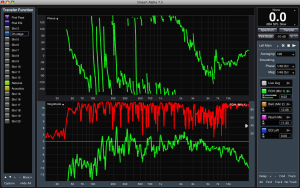 Bishop Barry did a EVP session with a little 3 year old boy in his bedroom and the ghost in the room said it's name was Pat and also to respect him. No one else was in the room at the time of the recording.

EVP stands for Electronic Voice Phenomenon which is the recording of ghost voices on audio tape and other audio recording devices. EVP recordings are heard under the white noise, that static, fuzzy noise you get when you are between radio stations or when playing back a blank tape. These voices can be fuzzy and hard to hear, and others can be more obvious and easy to understand. Some EVP recordings do not make any sense and others sometimes speak directly to the people doing the recordings and are able to reveal personal and private information and answer researcher?s questions.

These recordings are not very long and often spirits use bad grammar, but then again, so do a lot of living people. Animal sounds have been found on EVP recordings as well. EVP can only be heard on the playback of the tape and not while the recording is taking place. Just like how pictures reveal paranormal things to us that our eyes could not pick up, an audio recorder can do the same for paranormal sounds.

The idea of using audio tape to get messages from the deceased first began with Thomas Edison in the early 20th century but was not taken seriously until a man named Friedrich Jurgenson in 1959 found a voice on a tape he used to record bird songs. He later found more voices on other recordings with new, specific information about him that informed Jurgenson how to perform further EVP recordings. He eventually wrote a couple of books called Voices from the Universe, and Breakthrough.

If you visit haunted sites and get EVP's, do not get obsessed with them. EVP Sessions should only be used to help determine what kind of haunting is occurring. If a Spirit answers a question like it's name then it is an Intelligent haunt. If you get animal growl's and voices cursing it maybe Demonic but if you just get repeated unaware talking then it maybe just Residual and it is like a recording.

If you do attempt to do your own EVP with the older tape recorders, remember to always use fresh, brand new tapes to avoid any old recordings that can bleed through to the tape and be misinterpreted to be something it isn?t. Digital recorders work well capturing EVP's and more convenient to use than the older tape recorders. Also, when doing an EVP recording avoid any background noises and only talk when you are asking the questions you hope to have answered by the spirits. Also consider using an external microphone with your audio recorder.

This will also help prevent any internal noise from the recorder you don't want on the recording. Night is probably the best time to do an EVP recording. Since most people sleep at night there is less broadcasting going on. The most serious EVP researchers will use the highest quality of tape, sensitive microphones, and amplifiers to increase the quality of the recording.

Recording EVP is not always easy, all kinds of electronic equipment can obtain radio signals and no matter how much you try to filter these signals out, it is sometimes impossible. Also, there is so much static and white noise that it is extremely difficult to make out the messages but many investigators are occasionally able to capture some good EVP's.